Finally the best of our photos are online. You can experience a glimpse of what we have seen. Enjoy!

Due to some failure in satellite communication, Thijmen’s extended report never reached anyone, possibly due to the weather as well. The video ( that currently does not want to upload) shows my view from the ABC (with the peak invisible due to the mist), as well as the weather conditions there the morning after the summit push. At 4300 it was already grim, imagine the situation 2000 meters higher! With 80 km/h winds and near zero visibility, turning back is the right choice. Here’s Thijmen’s report of that morning..:

“A window of opportunity, that’s what Sunday was. At the start of this trip, there was a schedule that was optimizing acclimatization, and a possible summit attempt. When this summit day came closer, the weather became a more and more important factor. During the last week it became clear to our team that our weather window was small. After our rest days, there was actually only one good day, the 11th of August. So, we took our chances and aimed for the summit!

However, maybe the forecast changed, or this was as good as it gets above 6000 meters, but climbing was nearly impossible, with every step forward, I took one step sideways. Horizontal snowblasts decreased our visibility at 4 in the morning to nearly nothing. The sunrise revealed black clouds everywhere around the peak. At this speed, with these conditions, we had no other chance than to turn back. This window of opportunity was shut.

This meant the end of our attempt, and due to the even worse weather forecast for the next few days, waiting was no option. This adventure had ended, abruptly, for both Rim and me, although not at the same time, still with the same result. That the mountain is still there to climb another day, and still has to be conquered by both of us, even though I got a little closer.”

Now, we are back in Osh, after a few days in ABC and BC, resting, and some snowball fights actually, for it went from 35+ to a white landscape of snow in a day at BC, so we decided to leave for Osh a little earlier. Here, we enjoyed some good food and the bazaar, the ancient Silk Road market that has existed for centuries. Next on the list is a drive back to Bishkek, and that is where our adventure will really come to an end, but for now, we will enjoy some more days in the incredible country of Kyrgyzstan..

Sunday morning we left early to try to reach the summit of the Lenin Peak. Unfortunately the conditions forced us to turn around as it was just far too dangerous to continue on after 6300m. The wind was too strong so we decided to call it off. For the next few days the weather forecast was not looking good in a hope to get another chance.

Climbing to 6100m is quite a struggle! But I am here, camp two! Besides the lack of oxygen it’s also extremely windy. The dry powder snow gets everywhere and you need to be sure to cover every bit of skin! Tomorrow we start at four, the moment I have waited for for months! Will I be capable? How will my body react? Do I have the endurance? Let’s find out if Lenin Peak allows me on his summit!

At 5am I left (with 8 others) Advance Base Camp to go to Camp 1. Hopefully the 4 other members of the group will follow one day after us. We arrived there at 11 and are now at 5300m. The hard wind is common but today was something else. Some empty tents were blown away down the slope and one actually came back up! Despite the hard wind it was really hot today, blue sky and a lot of sun. Tomorrow we are off to Camp 2 at 6100m.

A short message today. We walked to Advance Base Camp, Rim as well because he found a donkey too expensive. Thijmen is preparing for the summit and Rim will manage communications together with Alexander, our 82 year old expedition organizer. They will also enjoy the predicted good weather. We will have to wake up in six hours, so goodnight! Local time Kyrgyzstan 22.45h.

Today we had a rest day in Base Camp. We visited the Kyrgyzstan mountain festival. There were supposed to be awesome horse races but after yet another speech our priorities moved to shaslick bread and tea. Tomorrow we will go up to Advance Base Camp where Thijmen will start his summit attempt!

Today is a sad day. Rim has decided not to climb the peak. His foot is far from ok, which brings too much risks on a climb like this. Instead, he will go to Advance Base Camp and enjoy some fresh mountain air. Luckily, Thijmen is fit as ever and will try to reach the top. Due to possible bad weather at the end of the week, we will go up to Advance Base Camp tomorrow (Wednesday). Rim will most likely make this climb on the back of a donkey. We (Thijmen and the rest of the team) will go beyond the day after.

While most of the team slept in camp 1, Sergeiz stayed in Base Camp under antibiotic. Yesterday sadly two others had to descent to Advance Base Camp, Gerhard and Camillia. Today everybody regrouped in Base Camp for two rest days but Rim sprained his ankle! Hopefully everybody feels better soon! Rest, eat, drink and get well!

13:30h. We just arrived at camp 2! With strong winds and a minus twenty wind chill equivalent temperature, we won’t stay here for long. We also reached the summit of Razdelnaya (6190m) which was just around the corner. Now back down to camp 1 and sleep. 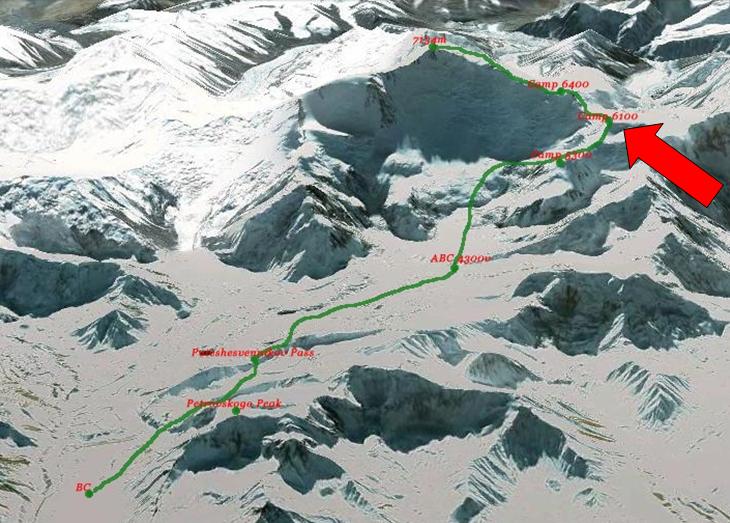